Many: The Diversity of Life on Earth

In Many, Nicola Davies (author of Bat Loves the Night, Outside Your Window: A First Book of Nature, Just Ducks!, and Tiny: The Invisible World of Microbes, among others), explores the topic of biodiversity, charmingly illustrated by Emily Sutton. Producing a book about life on earth can be a daunting task, and some books for children on the topic end up being simply collections of photos or illustrations showing as many different species as possible, filling up the pages. Davies shows us plenty of plants and animals, for sure – and bacteria and fungi, too – but in context in their environments and how some interact with each other. This is a book about species in their own habitats, ecological processes (but Davies stays clear of scientific jargon and keeps the text simple), and the effects that humans have had on life on Earth. 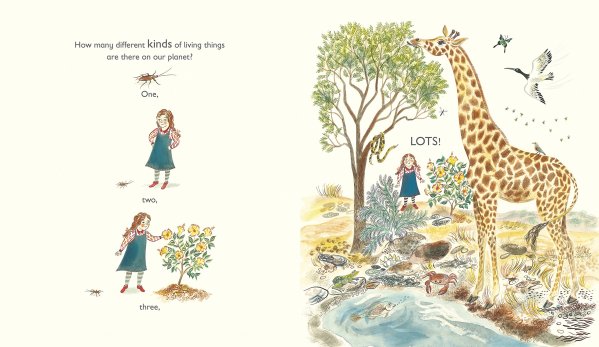 Our biodiversity guide is a young, red-headed girl armed with a notebook. She’s ready to jot down her observations, as any dedicated naturalist would do. She takes us to the desert and Galapagos Islands, to the canopy of a rainforest and to the ocean depths. Readers learn that life can be found almost everywhere on Earth, including in boiling volcanic lakes (although not stated, this page surely shows a feature of Yellowstone National Park). Our guide then shares how understanding the diversity of life can be difficult because some animals can look different but are of the same species (sexual dimorphism) or some can look the same but represent different species (mimicry). 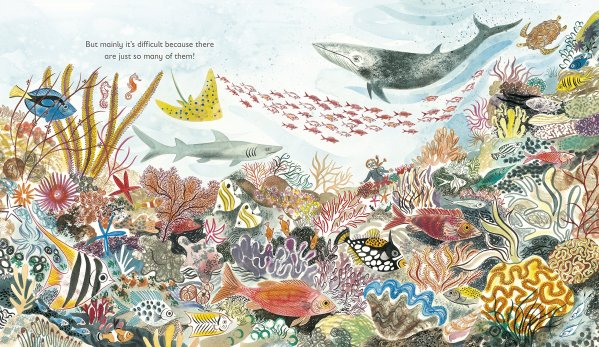 A quick lesson in ecological processes then brings the reader to the message of the book: “The trouble is, all over the world human beings are destroying pieces of the pattern…” Illustrations show the death of bees through pesticides, industrial pollution, over-fishing, and deforestation. A two-page spread showing a vibrant and dynamic rainforest scene is shown again, but as a melancholy scene, our guide sitting on the stump of a cut tree contemplating the effects of the destruction. The following scene (below) shows a variety of animal species that have gone extinct at the hands of humanity. 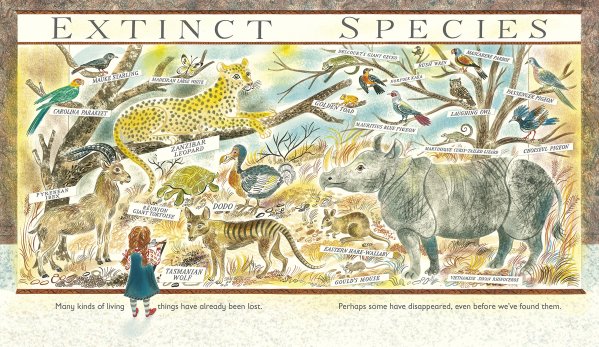 Our guide stresses to the reader that humans need to work to maintain the “many” in Earth’s biodiversity. Davies does well to focus the majority of the book on the grandeur of life on Earth, in all its colorful variety, and then to bring attention to the importance of environmental awareness. However, I feel the author’s focus on exotic animals and environments reinforces that it is nature out there, away from where one lives, that must be protected. The reader is not shown any species that live in North America (save the Yellowstone scene and desert scene, possibly) or Europe, where a majority of this book’s readers will be. I wish the book would have included scenes of nature, and the plants and animals that live there, that young readers would likely see near their home. That said, Many: The Diversity of Life on Earth is a beautiful book with a strong message – and I hope that the number of readers it has is: many.